Newborns in care proceedings in England

A new report has been released focusing on Infants subject to care proceedings as newborns.

The study used population-level data (2007/08 to 2016/17) held by the Children and Family Court Advisory and Support Service (Cafcass) to provide the first estimate of the proportion of care proceedings for infants in England that are issued for newborns.

New evidence is also presented about the frequency of newborn cases, case characteristics and legal order outcomes. Changes in the frequency and pattern of legal orders over time and regional differences are reported.

The study was led by Professor Karen Broadhurst at Lancaster University, who first highlighted the dramatic rise in newborns taken into care in 2015. 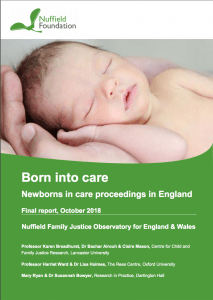 Maggie has been a Director at Rezume since 2008. Maggie specialises in Ofsted Inspection support and children's residential care compliance.